I am obsessed with our pets.  I miss them when I’m out of town.  I talk to them like they can understand what I’m saying.  I rush them to the vet at the smallest sign of a problem (an expensive, but comforting, habit).  Each of them came to us through rescue organizations.  Each of them had to be unwanted by someone else so that they could come live with us.  And thank goodness that they were because each of our two cats and our dog are totally amazing.  They know they’re safe with us and so their “person”alities can come shining through.  I decided to write this series of posts introducing each of our animals to let everyone know that there is absolutely no need to ever buy an animal from a pet store or a breeder.  There are millions of animals of all ages and breeds (both mixed and pure) that are in shelters or foster homes just waiting for someone to give them a home, and the good majority of them are totally fantastic. 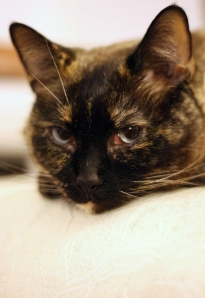 Zeda (pronounced Zee-duh) was born sometime in 2001.  I am not sure if she was adopted as a kitten, but I do know that she and her brother lived with a single woman in the midwest.  Around the time they were four or five years old, their owner went on a trip and got too sick to come home.  The person who had been looking in on the kitties presumably tired of caring for them and LET THEM OUT OF THE HOUSE.  In WINTER.

I am not sure what the thought process behind this action was, but probably even if I got a detailed explanation, I would not understand.  Luckily, Zeda and her brother were picked up by Animal Control that spring, after an estimated three months living outside.  Luckily (again), someone realized that they were Siamese mixes and/or Siamese Rescue checks shelters and both Zeda and her brother were brought into a foster home.  Each kitty was adopted separately and Zeda went to a house that already had two cats.

One of the main benefits of adopting from a rescue organization is that most of them have you sign a contract when you adopt saying that if anything does not work with your newly adopted animal, you can return it to the rescue.  They would rather you give the cat back to them than do something else (i.e. let it out of the house).  In Zeda’s case, we got REALLY lucky (third time!) because her new family did not take the time to properly integrate her with their other cats.  Zeda went back to Foster Mom’s (FM’s) house and back on the adoptable listing.

At this point in the story, it was 2007, and I was moving to start grad school in August.  I had a sweet studio apartment with a great pet policy to live in and I needed a kitty.  I grew up with Siamese cats and I’ve always thought they have the best personalities, so I checked out the available cat listings from Siamese Rescue.  Another great thing about rescue groups is that they usually know A LOT about the animals that they have rescued.  If an animal has been living in foster care, then the FM can tell you things about personality, litter box habits, phobias, and how they get along with people and other animals that a shelter might not always know.  I inquired about three cats and Zeda’s FM got back to me super quickly.  Zeda sounded perfect and I was able to officially adopt her the day after I moved in.

After a month or so of being a scaredy cat and hiding behind the litter box, Zeda started to show her personality.  A cable guy that came once right after I moved in and again six weeks later remarked on how much friendlier Zeda became in that short time.  It’s as if she finally understood that she was with her forever person and didn’t have to feel sad about being given back by the first adopters any more.

Zeda’s a surprising cat in that she likes to greet people and demand petting by climbing onto laps and nuzzling hands.  She got me through the first year of graduate school by greeting me at the end of each day, obviously glad to see me.  She is super vocal, with a very distinctive chirpy meow, to people and to Tonks.  She has never scratched or bitten anyone.  She likes to play with wand toys, look out the screen door, and eat yogurt.  Many a self-professed “not a cat person” has met her and admitted to probably being able to like cats if they were all as great as Zeda.  Not all cats are as great as she is; we are thankful every day that she’s ours. 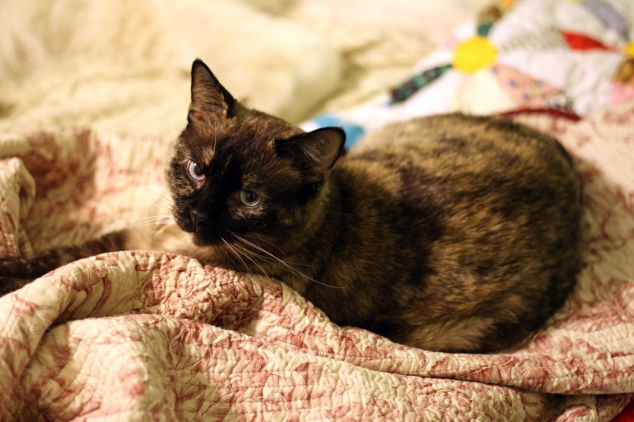 One thought on “Zeda’s Story”