Do you ever feel so bogged down by

one thing that you can’t get anything else done?  The closet in our guest bedroom was like that for me.  After I sold all our furniture, I was totally ready for that room to become a crafting mecca, but instead I ended up with a very full closet (see photo, right).  The giant box that says “wrapping” held all my craft supplies for beading, paper crafts, fabric crafts, and absolutely no wrapping.  I couldn’t ever find the supplies I needed and the box was too deep for the shelf it was on, so it fell on me a lot as I was digging through it looking for glue sticks or the corner puncher.  I also had nightmares of it falling and crushing our cats.  When the giant box was full, I just kept piling craft supplies on the floor of the closet in grocery bags, which meant that it was a huge production to try to extricate my fold up work table, which was [in]conveniently stored at the back of the closet.  The huge production meant that I wasn’t doing crafts (sad) or was doing them at the kitchen table or on the living room floor (messy).

After the giant box fell on me or I tripped over the nine bags of craft supplies (I don’t remember which) for the last time, I vowed to do something about it.  But storage stuff is EXPENSIVE and my anxiety about money is at an all time high (more on this later).  Enter this inspiring tutorial, the fact that we work in an academic building where things get delivered in cardboard every single day, and the people who owned our place before us, who left MOUNTAINS of stuff behind, including several volatile chemicals Hubs took to the disposal center (rude) and tons of extra closet shelving (useful).  I now have custom storage boxes for under $15!  It would have been less, but mid-project I had to buy glue for the hot glue gun because I couldn’t find the extra in the giant box, and really that was just an incentive to get done and fast.  Things I found that had been lost in the clutter abyss:  18 glue sticks (3 separate almost new packages), some really cute, forgotten fabric scraps (to be featured in an imminent project), and three different, opened packages of cat treats (?!). 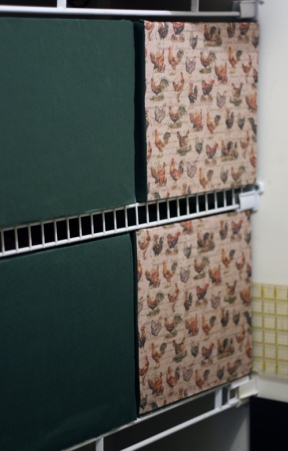 So tidy! Some of the paper I used has roosters!

One thought on “Closet Reorganization”