Our current rental house looked so promising at first: yoga room, brew room off the garage, dining room, large kitchen with ample storage, fireplace, two baths, and a fenced-in yard, the cherry on top for our sweet pup. In many ways, all of these allegedly awesome things have been awesome, but with a house this big, I’ve found us accumulating stuff, and it’s expensive to rent and to heat and cool. These are obviously minor problems and within our control (buy less stuff! turn down the heat and grab a blanket!), but it’s the out of our control things that have been more problematic.

Getting the management company to clean up broken glass from the previous tenant in the yard–something they said they would do when we moved in almost a year ago–was a nine month battle that we gave up on and just cleaned the glass ourselves. On Sunday, an outlet that had a small piece of something permanently broken off in one of the plugs spontaneously caught fire. Hubs was there and turned off the breaker before the fire went anywhere beyond the outlet itself, but if he hadn’t been, who knows how far it would have spread. But the most special part of living in this house has been the mice, which brings me to today’s story.

Shortly after moving in, I noticed that there were mouse droppings and one chewed food package in one of the kitchen cabinets. I was obviously totally grossed out, so I pulled everything out of the cabinet in question and its neighboring cabinet, found more evidence of mice, threw a bunch of stuff away and cleaned a bunch of other stuff, including the cabinets themselves and my arms up to the elbows multiple times. Then did my best to block the entrance to the cabinet from the gaps around the stove hood exhaust that go up to the attic, where it looked like they were coming in. After showering extra-thoroughly, I felt that my job was done.

That night, Hubs and I were sitting in the living room watching a show, and Zeda came walking in. I tend to praise the cats for carrying around their toys, which likely sounds ridiculous to anyone not as into cats as I am, but so be it. So when I saw she had something in her mouth, I said, “Goooood kitty, do you have your–SHE HAS A LIVE MOUSE!”

Hubs grabbed her–with the mouse still in her mouth–and ran for the front door to carry her out. I asked him to stop so that I could take a photo of Z with the mouse and OF COURSE she dropped it. In the yoga room. What ensued looked like Zeda hunting the mouse, while Duncan sort of herded it, and Tonks enthusiastically, albeit unhelpfully, sort of jumped around and thought that Dunc and Z were playing with her (bless). Eventually Z recaptured it and then Hubs actually got her outside and made her drop it. A week later, Z also caught a bird that ended up inside. She is, without a doubt, the family MVP. 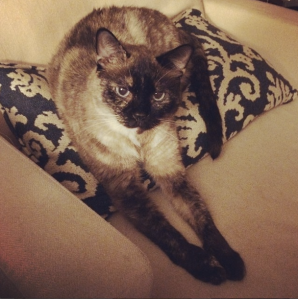